If we could sample tyre data directly and produce the tyre force plot, then we would have a method to determine what force the tyre can produce in any direction. The tyre manufactures normally conduct combined forces tests at the same time as the pure lateral and pure longitudinal tests. The same problem of noise occurs as shown in the chart below. Note in this case part of the test is also missing due to limitations of the tyre stability rig. It would be very difficult to fit MF-Tyre curves to this surface with any degree of confidence. 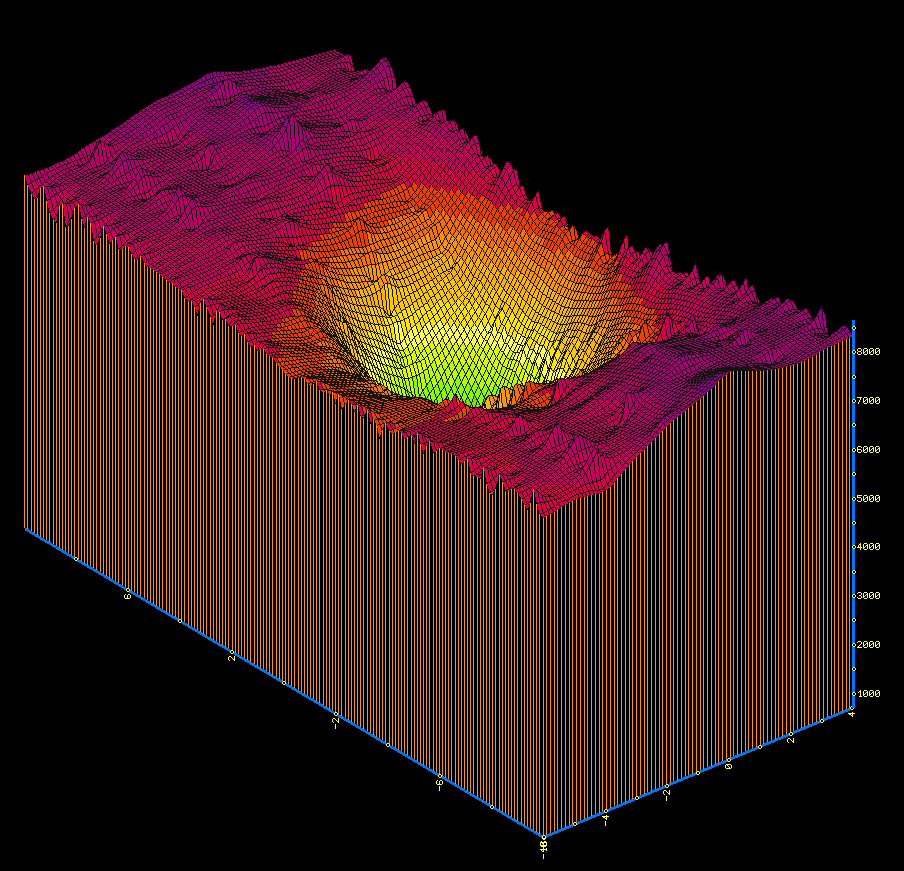 The conventional data collection methodology is not suited to this complex three dimensional surface. This can be seen in the next two charts which show a comparison between a conventional and an optimized method.
This is a truly three dimensional problem and yet the information is normally collected in a traditional two dimensional fashion. This produces areas with an extremely high density of data points and other areas with no data at all. Obviously, when mapping any surface, the best results are obtained if the data point spatial densities are directly related to the areas where the transitions in curvature occur. This would save on tyre wear and improve the consistency of results. In turn the coefficient fitting would become easier as greater detail would be available in the areas where the fit is of most importance. Other optimized data collection methodologies are also possible based on DOE procedures. 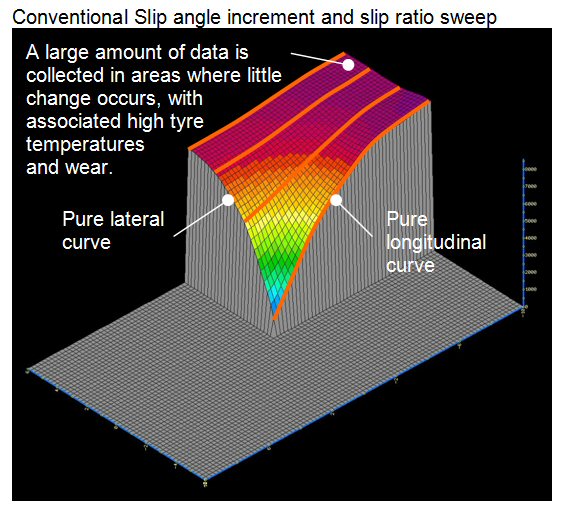 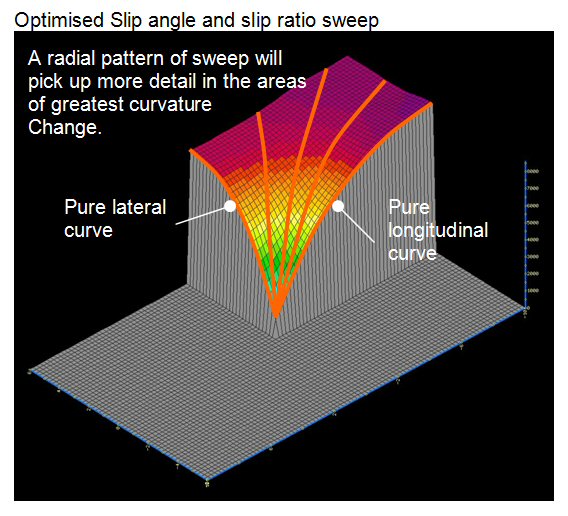 If we resample the raw combined forces data, plots as shown below can be produced. In fact this plot effectively covers the operating envelope of the tyre at this load and camber situation. From this information the traditional traction ellipse can also be constructed. The range of slip angles and slip ratios shown hear are also sufficient for the fitting of MF-Tyre coefficients as most of the important curvature transitions are also covered. In reality, or as far as vehicle dynamics programs are concerned, the tyre would very rarely be operating outside the ranges shown here. The most important point is that one tyre is used for the whole test. This ensures that the peak values for lateral and longitudinal forces are related. This is not possible with the pure tests, as more than one tyre has to be used due to wear. In fact, in the pure tests the lateral force peak was higher than the longitudinal peak (not the case in these combined tests). This would have given a totally false result to the combined situation if the coefficients had been fitted to the pure results first (the procedure that normally takes place during coefficient fitting). On the other hand this "Black Hole" plot is totally convincing. 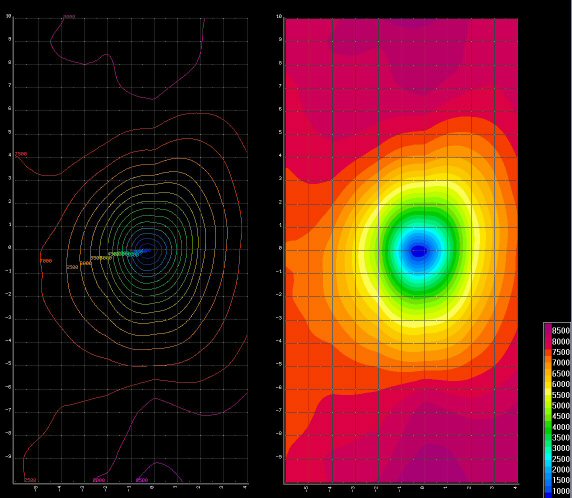 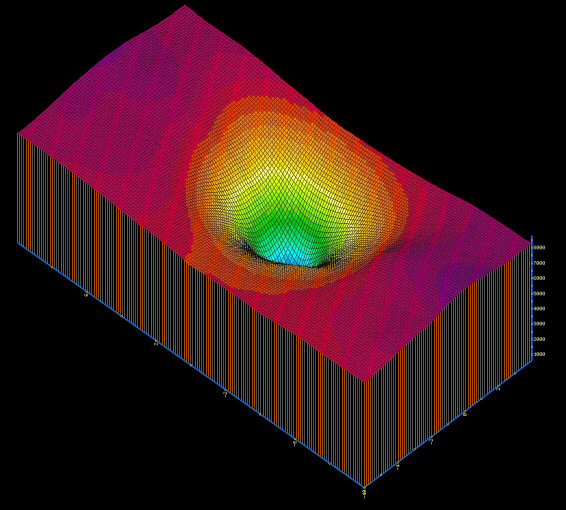 With the use of Kriging the surface can also be extrapolated into the region of the missing data with a high degree of confidence. Compare the surface below with the original raw data surface at the top of the page. With the optimized use of Kriging in this way we can further save on tyre wear, time and money. The picture below speaks for itself! 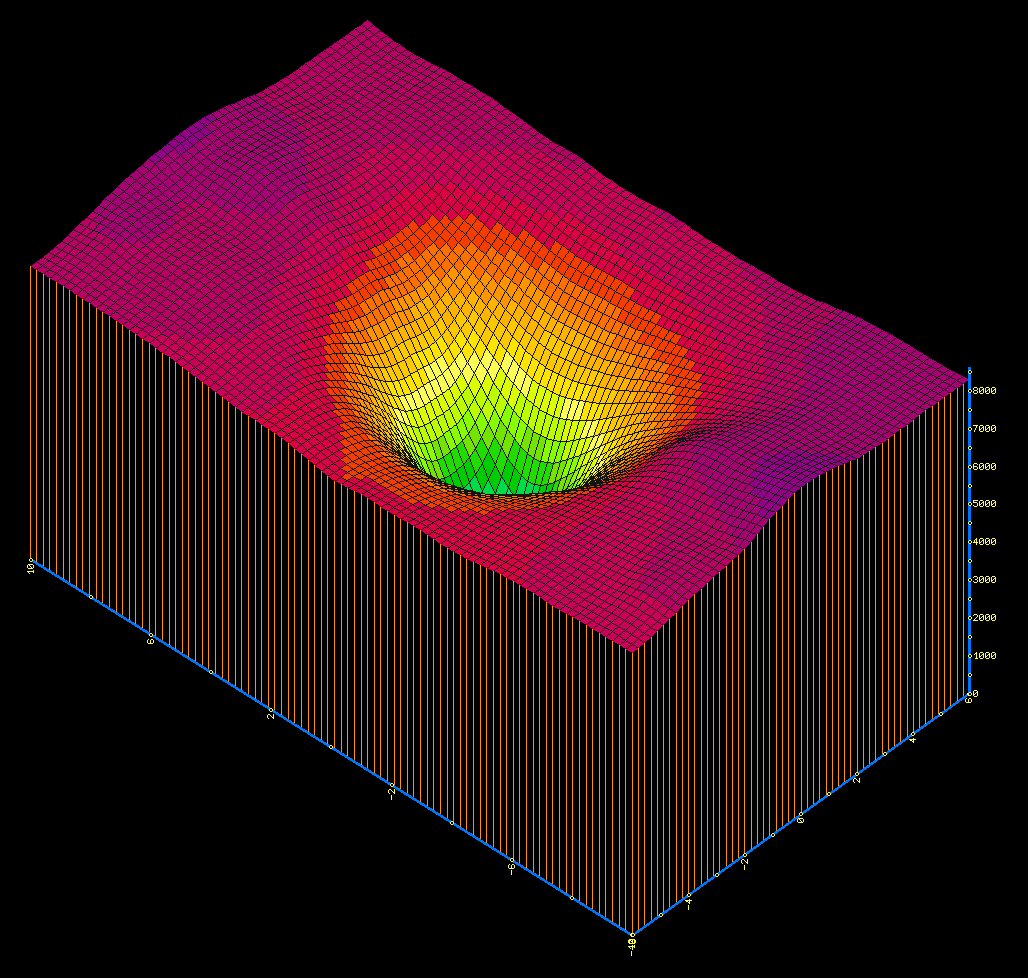