I must first state that I have had absolutely no medical training. My professional work has revolved around the modeling and simulation of complex geometrical and dynamic systems . the aim has always been to optimize the potential of man and machine working together. The pages that follow are therefore written from the perspective of a vehicle dynamics engineer. It might be advantageous to recap at this stage on some of the basic principles and philosophies of this approach. Please look at the pages shown below and then use the back arrow in your browser to return to this page.


Why is it exactly that knee injuries are the most common, and oftentimes most detrimental of all sport-related injuries? There’s no doubt your knees take plenty of abuse during most activities, but it’s the complexity of the knee joint that makes it especially susceptible to damage. In a nutshell, the knee is not just a simple hinge joint. In fact, it possesses six different “degrees of freedom,” and consists of a complex array of bone, soft tissue, muscle, and fluid, making it the most sophisticated joint in the human frame. The knee joint is an irreducible one, meaning it is not able to perform its basic function if any one of its complex parts is compromised. The femur and tibia are essential because they perform the rolling and gliding motion. The two cruciate ligaments are crucial because they act as mechanical linkages that perform a vital guiding function in the joint. If just one ligament is removed, the joint can no longer function as a hinge, leaving it with limited performance. Anyone who has experienced a ruptured cruciate ligament knows this all too well, as the critical characteristics of the knee joint must not only be present, but must also be precisely compatible with each other to produce the right physical motion. 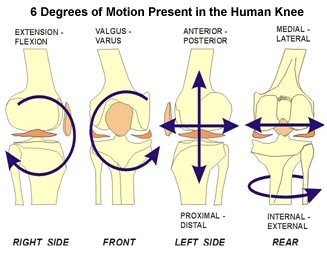 What then do we require from a knee brace?

This question can only be answered by first analyzing the situation. A very simplistic but non the less valid answer can be taken from the three golden rules of vehicle dynamics.


Control and stability tend to be "two sides of the same coin". That is, systems that provide good control are intrinsically unstable. Whereas systems that offer good stability often restrict the amount of control available. This is not to say that the two are mutually exclusive. The aim is to produce a bracing system that has good control and stability. Handling is perhaps the most difficult to understand. It may be that the act of just skiing with a brace has some sort of psychosomatic effect, and therefore problematic to define. What is important here is that the response of the skiers actions is "what he expected".

Not all of the knees ligaments are under tension all of the time. there is a considerable amount of compliance (laxity) during flexing. The two cruciate ligaments are only both under tension during the last 30 degrees of leg extension. this so called "screw down" effect rotates the tibia in relation to the femur and stabilizes the knee at full extension. With a torn ACL this stabilizing action cannot take place. It is therefore necessary, not only to look at the knee joint from a geometric point of view, but also taking into account of the kinetics (the forces involved with movement).

The diagrams below show how the contact axes between the tibia and fibula change with the degree of flexion angle. 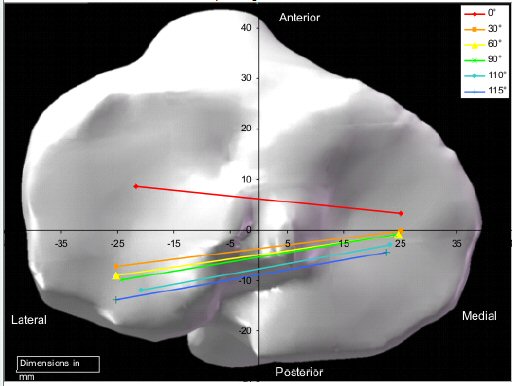 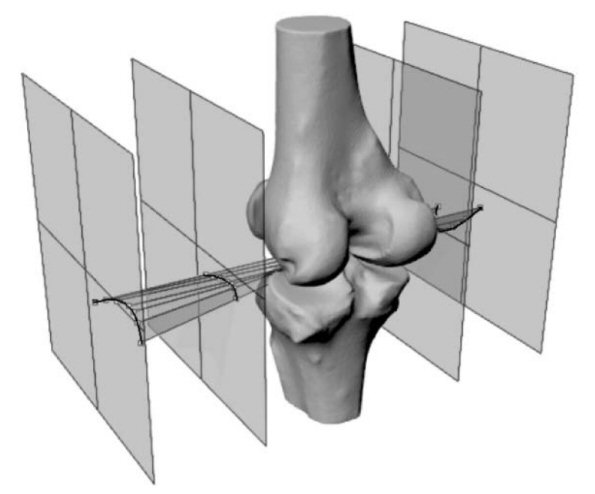 For our brace system we would ideally require hinges that have the full degrees of freedom that a normal natural knee has but no more. How can that be achieved? If we superimpose the two cruciate ligaments onto the knee animation as show below, we can see that the rotation point changes with knee flexion. This is called a "four bar linkage" system. However, we must be very careful not to over simplify this motion. The links in this animation are not fixed in length. Just as the ligaments are not always under the same amount of tension in the kinematic sense. The true axis of rotation in a 3D model of the knee joint must be established. 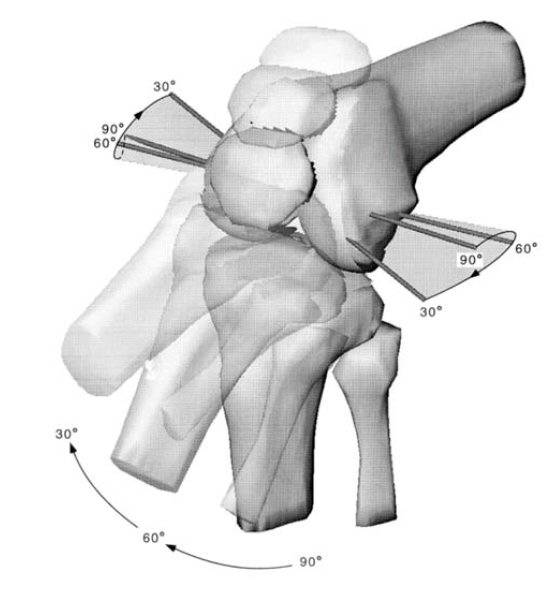 Why is this rotation axis so complex? In part, it is to do with the shape of the bones within the contact areas. If we look at the shape of the tibial plateau, as shown below, we can see that the medial (inside), has a concave shape and the lateral side (outside) has a convex shape. the fibula must roll and translate (slide) over this surface as the leg flexes. 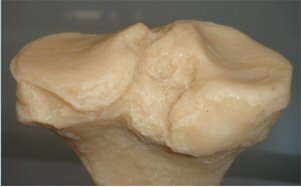 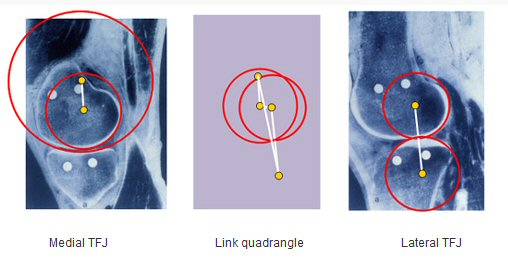 The tibio-femoral joint (TFJ) controls the overall movement of the knee. The kinematics of the joint are determined by the geometry of curvature of the articulating joint surfaces. The red circles roughly correspond to the radii of curvature of the respective joint surfaces. The diameters of the circles are clearly different, and the joint is said to be `incongruent´. The center of the circles, indicated in yellow, do not coincide. The lateral TFJ (figure on the right) has a convex tibial surface, in contrast with the
medial side. As a result, the tibial rotational axis lies distal to the joint surface. The lateral femoral condyle is convex and the axis lies more posterior in the direction of the medial femoral axis.
This geometric construction is very similar to the "Bennett linkage". In fact in a 3D model the two cruciate ligaments also form a Bennett linkage. An animation of the Bennett linkage in action is shown below. Note that six degrees of freedom are possible with this system.

Can a less complex linkage system be found for the hinges in our knee brace? A spherical four bar system would be the best candidate to follow the normal and natural motions of the knee. We will look at various optimization possibilities in the last section on modeling and simulation. Here is a link to a web site that contains some very interesting candidates for an optimized knee brace hinge system.